A thread is like a transient gall agent. Unlike an agent, it can end and it can fail. The primary uses for threads are:

Threads are managed by the gall agent called spider.

Threads live in the ted directory of each desk. For example, in a desk named %sandbox:

From the dojo, ted/baz.hoon can be run with -sandbox!baz, and ted/foo/bar.hoon with -sandbox!foo-bar. Threads in the %base desk can just be run like -foo, but all others must have the format -desk!thread.

NOTE: When the dojo sees the - prefix it automatically handles creating a thread ID, composing the argument, poking the spider gall agent and subscribing for the result. Running a thread from another context (eg. a gall agent) requires doing these things explicitly and is outside the scope of this particular tutorial.

There are three files that matter:

/sur/spider/hoon defines a thread as:

That is, a gate which takes a vase and returns the form of a strand that produces a vase. This is a little confusing and we'll look at each part in detail later. For now, note that the thread doesn't just produce a result, it actually produces a strand that takes input and produces output from which a result can be extracted. It works something like this: 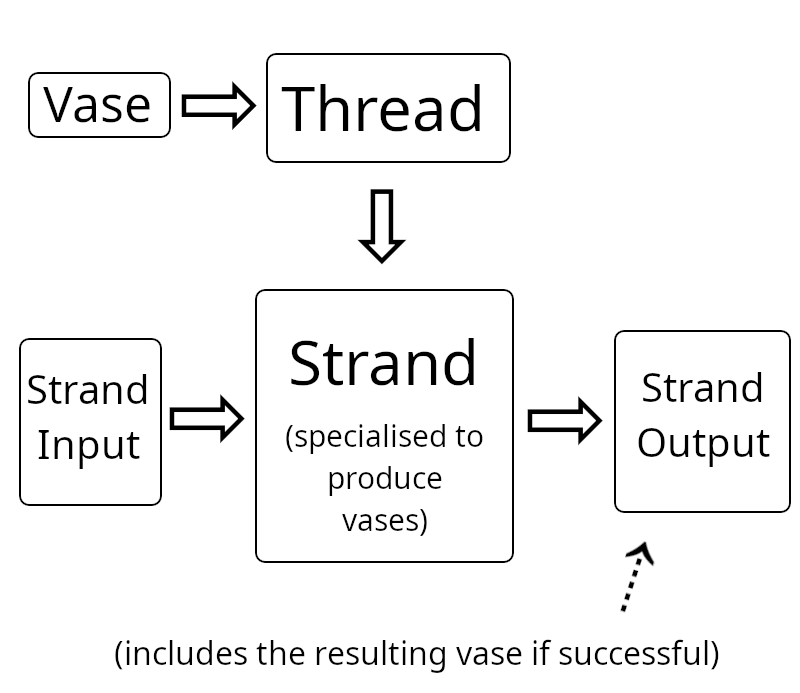 This is because threads typically do a bunch of I/O so it can't just immediately produce a result and end. Instead the strand will get some input, produce output, get some new input, produce new output, and so forth, until they eventually produce a %done with the actual final result.

Strands are the building blocks of threads. A thread will typically compose multiple strands.

A strand is a function of strand-input:strand -> output:strand and is defined in /lib/strand/hoon. You can see the details of strand-input here and output:strand here. At this stage you don't need to know the nitty-gritty but it's helpful to have a quick look through. We'll discuss these things in more detail later.

A strand is a core that has three important arms:

We'll discuss each of these arms later.

NOTE: a comma prefix as in ,vase is the irregular form of ^: which is a gate that returns the sample value if it's of the correct type, but crashes otherwise.

The form arm is the mold of the strand, suitable for casting. The two other arms produce forms so you'll cast everything to this like:

The above code is a simple thread that just returns its argument, and it's a good boilerplate to start from.

Save the above code as a file in ted/mythread.hoon and |commit it. Run it with -mythread 'foo', you should see the following:

NOTE: The dojo wraps arguments in a unit so that's why it's [~ 'foo'] rather than just foo.

We'll go through it line-by line.

First we import /sur/spider/hoon which includes /lib/strand/hoon and give the latter the face strand for convenience.

We make it a thread by casting it to thread:spider

We create a gate that takes a vase, the first part of the previously mentioned thread definition.

Inside the gate we create our strand specialised to produce a vase and give it the canonical face m.

We cast the output to form - the mold of the strand we created.

Finally we call pure with the gate input arg as its argument. Since arg is a vase it will return the form of a strand which produces a vase. Thus we've created a thread in accordance with its type definition.

Next we'll look at the third arm of a strand: bind.