In this lightning tutorial, we're going to build a voting app for groups called Tally, which uses linkable ring signatures. If the group host has Tally installed, members may make proposals, and other members may vote yea or nay on them. Linkable ring signatures allow votes to be anonymous - each vote can be verified to have come from a group member and duplicate votes can be detected, but it cannot be determined who voted for what. The finished app will look like this: 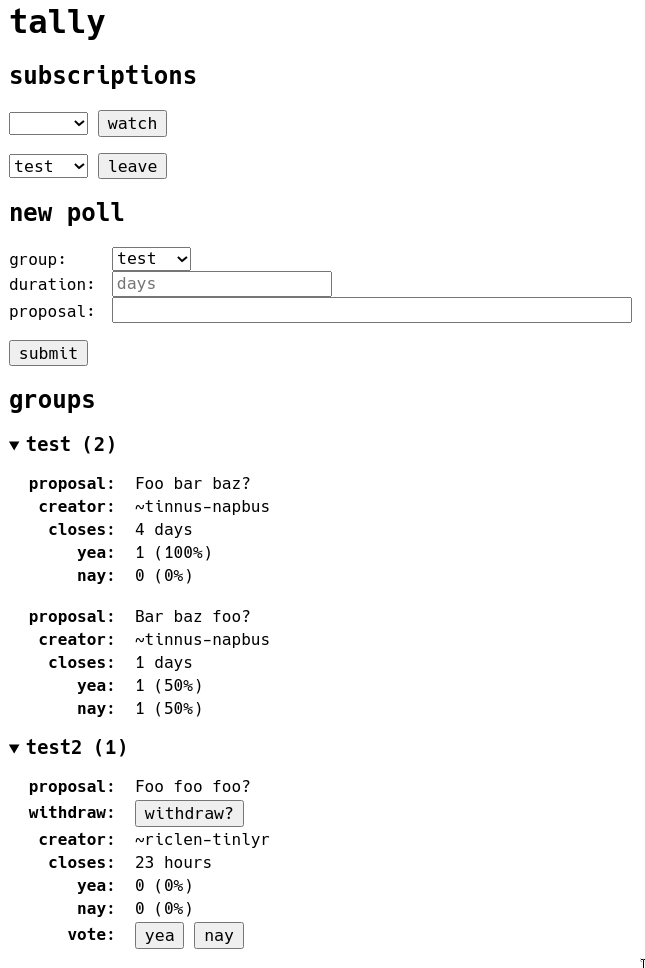 The front-end of the app will be written in Sail, Urbit's XML language built into the Hoon compiler. Using Sail means we don't need to create a separate React front-end, and can instead serve pages directly from our back-end. This works well for static pages but a full JS-enabled front-end would be preferred for a dynamic page.

The app source is available in the docs-examples repo on Github, in the voting-app folder. It has two folders inside:

This section will walk through putting together and publishing the app from scratch, but will be light on commentary about how the app works. For more details on that, you can refer to the Code commentary section below.

If you've already got the urbit CLI runtime installed, you can skip this step. Otherwise, run one of the commands below, depending on your platform. It will fetch the binary and save it in the current directory.

App development is typically done on a "fake" ship. Fake ships don't have real networking keys and don't connect to the real network. They can only communicate with other fake ships running on the local machine. Let's spin up a fake ~zod galaxy. We can do this with the -F option:

It'll take a couple of minutes to boot up, and then it'll take us to the Dojo.

Once in the Dojo (as indicated by the ~zod:dojo> prompt), let's mount a couple of desks so their files can be accessed from the host OS. We can do this with the |mount command:

With those mounted, switch back to a normal shell in another terminal window. We'll create a folder to develop our app in, and then we'll copy a few files across that our app will depend on:

Now we can start working on the app itself.

Type definitions are typically stored in a separate file in the /sur directory (for "surface"), and named the same as the app. Save the following code in tally/sur/tally.hoon:

The %base desk of ship includes a ring.hoon library for ring signatures. This implementation verifies signatures against a ship's most recent keys, which may cause problems verifying old polls if group members rotate their keys. To solve this, here is a slightly modified version that takes a ship's life (key revision) as an additional argument:

Save that file in the tally/lib/ directory.

Next, we'll add our agent (the app itself). Gall agents live in the /app directory of a desk, so save this code in tally/app/tally.hoon:

Marks are Urbit's version of filetypes/MIME types (but strongly typed and with inter-mark conversion methods). We need to define a mark for the actions we'll send or receive, and the updates we'll send to subscribers or receive for subscriptions. These will be very simple since we don't need to do any conversions to things like JSON.

We could have put the front-end code directly in our Gall agent, but it tends to be quite large so it's convenient to have it in a separate file and just import it. Most of this file consists of Sail code, which is the internal HTML representation, similar to other server-side renderings like Clojure's Hiccup.

Save the code below in tally/app/tally/index.hoon.

With our types, agent, mark files and front-end now complete, the last thing we need are some desk configuration files.

Firstly, we need to specify the kernel version our app is compatible with. We do this by adding a sys.kelvin file to the root of our tally directory:

We also need to specify which agents to start when our desk is installed. We do this in a desk.bill file:

Lastly, we need to create a Docket file. Docket is the agent that manages app front-ends - it fetches & serves them, and it also configures the app tile and other metadata. Create a desk.docket-0 file in the tally directory and add the following:

Our app is now complete, so let's try it out. In the Dojo of our fake ~zod, we'll create a new desk (filesystem repo) by forking from an existing one:

Next, we'll mount the desk so we can access it from the host OS:

Currently its contents are the same as the %webterm desk, so we'll need to delete those files and copy in our own instead. In the normal shell, do the following:

Back in the Dojo again, we can now commit those files and install the app:

If we open a web browser and go to localhost:8080, we should see a tile for the Tally app. If we click on it, it'll open our React front-end and we can start using it.

Once we've confirmed it's working on our fake ~zod, we can shut it down with |exit or CTRL-D and try installing it on a real ship instead. To do that, we can just repeat the steps in this section with our actual ship. On the live network, we can also publish the app so others can install it from us. To do so, just run the following command:

Now our friends will be able to install it with |install <our ship> %tally or by searching for <our ship> on their ship's homescreen.

A poll is the following structure:

The ring-group is a structure from /sur/ring.hoon, and contains the set of all participants, their key revisions, and a "linkage scope", which is used to associate votes with a particular poll and detect duplicates. We just set the linkage scope to the poll ID (pid).

The action structure defines what requests/actions can be sent or received in pokes (one-off messages):

The update structure defines what updates/events can be sent out to subscribers or received from people to who we've subscribed:

Our agent imports the structure file we create, some structures for dealing with groups and their metadata, some utility libraries including the ring signature library, and our index.hoon front-end file.

The agent's state is defined as:

The by-group structure is mip, which is a map of map. The first set of keys is the group ID, and then for each group there is a map from poll ID to the poll and associated votes. We additionally have voted and withdrawn to keep track of actions we've taken so the front-end will update instantly rather than having to wait for a remote ship to acknowledge the request.

A Gall agent has ten event handler arms. Most agent arms produce the same two things: a list of effects to be emitted, and a new version of the agent itself, typically with an updated state. It thus behaves much like a state machine, performing the function (events, old-state) => (effects, new-state). We'll look at some of our agent's significant arms:

This arm is called exactly once, when the agent is first installed. We just pass a task to Eyre, the web-server vane, to bind the /tally URL path so visiting that will load our front-end:

This arm handles pokes, which will either contain actions or HTTP requests from the web interface. Our on-poke tests the mark to see which it is, and then calls either handle-http or handle-action as the case may be.

handle-action tests what kind of request it is (new poll, vote, etc) and handles it appropriately (check permissions, update state, send out updates to subscribers, etc). If it's a vote, it makes sure the ring signature is valid by calling the verify function in the ring.hoon library.

For handle-http, if it's a GET request, it calls index.hoon to produce the web page and returns it to Eyre on the subscription path specified by the request ID. If it's a POST request, it checks the key-value pairs to see what kind of request it is (vote, new poll, subscribe request, etc), converts the request into an action, calls handle-action to process it, and then sends a 302 redirect back to the index to reload the page.

This arm handles subscription requests, which will either come from Eyre when waiting for a response to an HTTP request, or from other ships who want to subscribe to polls for a group we host. In the latter case, we make sure they're a member and then send them out the current state of the polls for that group.

This arm handles updates from people we've subscribed to, which will be other groups we're a member of. The messages we'll receive here will contain updates, which we'll process in a similar manner to the actions in on-poke. All incoming votes will be validated here also.

Below the agent proper, we have some additional useful functions, such as retrieving group members from the Groups app and putting together HTTP responses.

As mentioned previously, our front-end is written in Sail, and contained in a separate index.hoon file which our agent imports. Sail lets us easily build XML structures inside hoon, and looks like this:

Most of index.hoon contains the various front-end components like this. It also contains some functions to retrieve lists of groups, group metadata, current subscriptions, etc.

To learn to create an app like this, the first thing to do is learn Hoon. Hoon School is a comprehensive guide to the language, and the best place to start. After learning the basics of Hoon, App School will teach you everything you need to know about app development.

Along with these self-directed guides, we also run regular courses on both Hoon and app development. You can check the Courses page for details, or join the ~hiddev-dannut/new-hooniverse group on Urbit.