Every noun in Urbit is an atom or a cell. This module will elaborate how we can use this fact to locate data and evaluate code in a given expression. It will also discuss the important list mold builder and a number of standard library operations.

Every noun in Urbit is a either an atom or a cell. Since a cell has only two elements, a head and a tail, we can derive that everything is representable as a binary tree. We can draw this layout naturally: 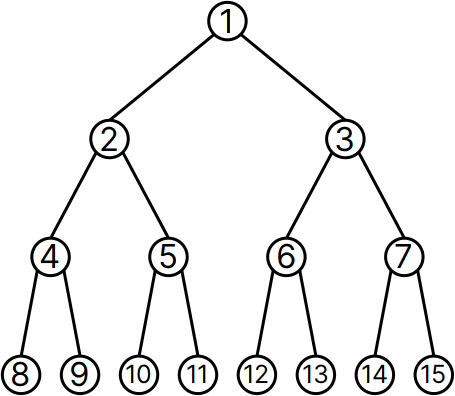 A binary tree has a single base node, and each node of the tree may have up to two child nodes (but it need not have any). A node without children is a “leaf”. You can think of a noun as a binary tree whose leaves are atoms, i.e., unsigned integers. All non-leaf nodes are cells. An atom is a trivial tree of just one node; e.g., 17.

For instance, if we produce a cell in the Dojo

it can be represented as a tree with the contents 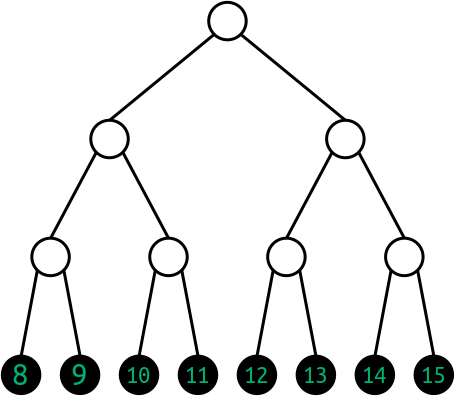 We will use the convention in these graphics that black-text-on-white-circle represents an address, and that green-text-on-black-circle represents the content at that address. So another way to represent the same data would be this: 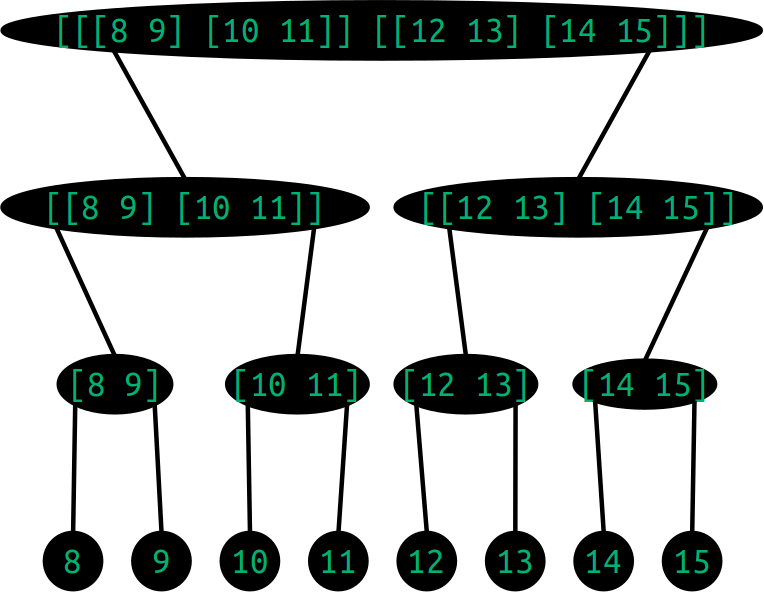 When we input the above cell representation into the Dojo, the pretty-printer hides the rightwards-branching [] sel/ser brackets.

We can refer to any data stored anywhere in this tree. The numbers in the labeled diagram above are the numerical addresses of the tree, and may be extended indefinitely downwards into ever-deeper tree representations.

Most of any possible tree will be unoccupied for any actual data structure. For instance, lists (and thus tapes) are collections of values which occupy the tails of cells, leading to a rightwards-branching tree representation. (Although this may seem extravagant, it has effectively no bearing on efficiency in and of itself—that's a function of the algorithms working with the data.)

What we've been calling a running cell would more conventionally be named a tuple, so we'll switch to that syntax now that the idea is more familiar. Basically its a cell series which doesn't necessarily end in ~. 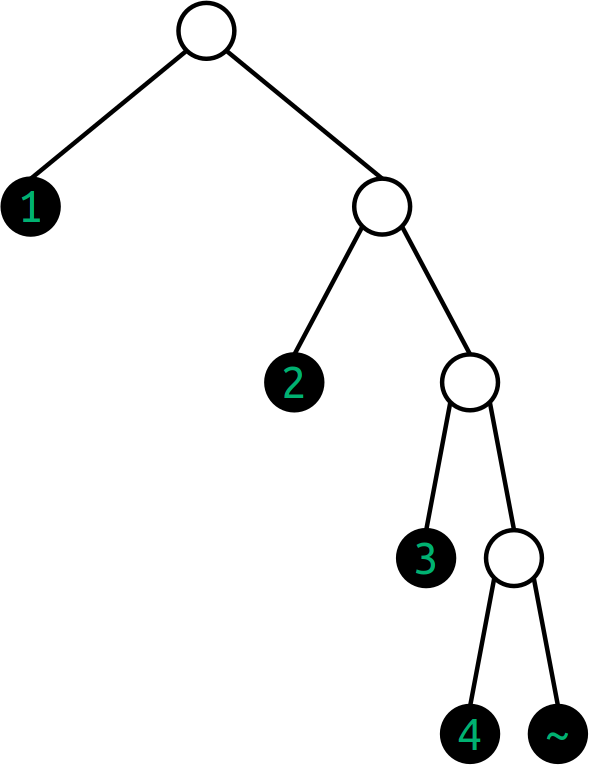 At this point, you should start to be able to work this out in your head, at least for the first few rows. The + lus operator can be used to return the limb of the subject at a given numeric address. If there is no such limb, the result is a crash.

We have used lists incidentally. A list is an ordered arrangement of elements ending in a ~ (null). Most lists have the same kind of content in every element (for instance, a (list @rs), a list of numbers with a fractional part), but some lists have many kinds of things within them. Some lists are even empty.

(Notice that all values are converted to the specified aura, in this case the empty aura.)

A list is built with the list mold. A list is actually a mold builder, a gate that produces a gate. This is a common design pattern in Hoon. (Remember that a mold is a type and can be used as an enforcer: it attempts to convert any data it receives into the given structure, and crashes if it fails to do so.)

Lists are commonly written with a shorthand ~[]:

True lists have i and t faces which allow the head and tail of the data to be quickly and conveniently accessed; the head is the first element while the tail is everything else. If something has the same structure as a list but hasn't been explicitly labeled as such, then Hoon won't always recognize it as a list. In such cases, you'll need to explicitly mark it as such:

Everything in Urbit is a binary tree. And all code in Urbit is also represented as data. One corollary of these facts is that we can access any arbitrary part of an expression, gate, core, whatever, via addressing (assuming proper permissions, of course). (In fact, we can even hot-swap parts of cores, which is how wet gates work.)

We have already seen numeric addressing used to refer to parts of a binary tree.

Since a node is either an atom (value) or a cell (fork), you never have to decide if the contents of a node is a direct value or a tree: it just happens.

A tape is one way of representing a text message in Hoon. It is written with double quotes:

A tape is actually a (list @t), a binary tree of single characters which only branches rightwards and ends in a ~:

Much like relative directions, one can also state “left, left, right, left” or similar to locate a particular node in the tree. These are written using - (left) and + (right) alternating with < (left) and < (right). 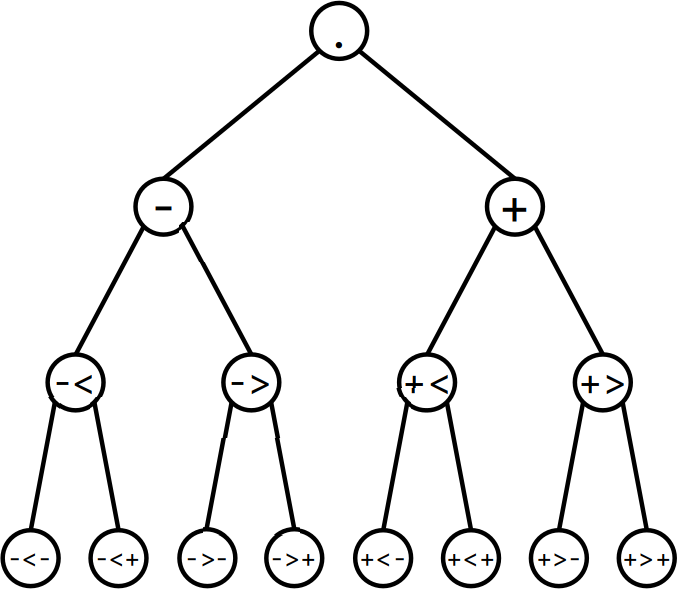 Lark notation can locate a position in a tree of any size. However, it is most commonly used to grab the head or tail of a cell, e.g. in the type spear (on which more later):

Lark notation is not preferred in modern Hoon for more than one or two elements deep, but it can be helpful when working interactively with a complicated data structure like a JSON data object.

When lark expressions resolve to the part of the subject containing an arm, they don't evaluate the arm. They simply return the indicated noun fragment of the subject, as if it were a leg.

Produce the numeric and lark-notated equivalent addresses for each of the following nodes in the binary fruit tree: 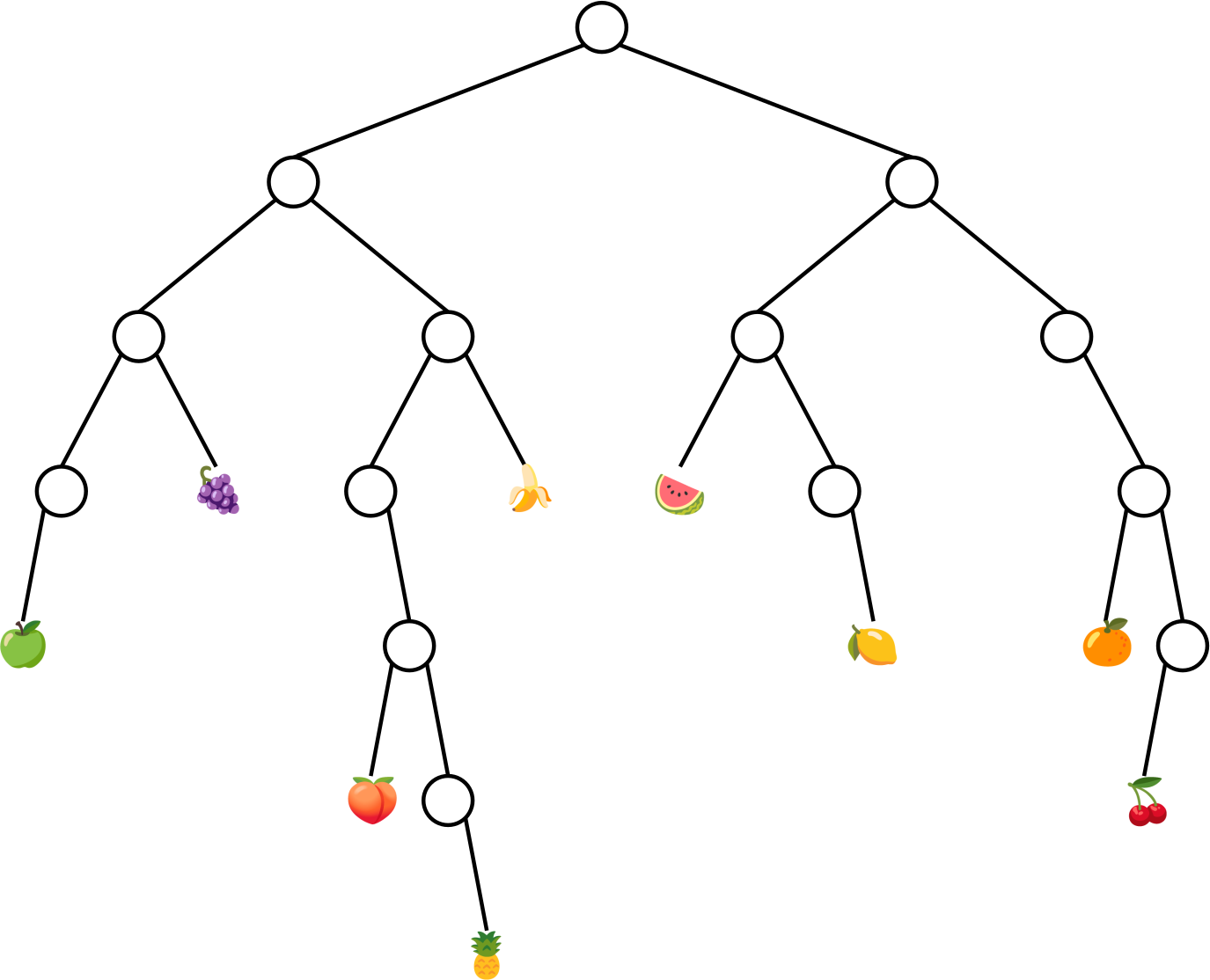 There is a solution at the bottom of the page.

Solutions to these exercises may be found at the bottom of this lesson.

One can also identify a resource by a label, called a wing. A wing represents a depth-first search into the current subject (context). A wing is a limb resolution path into the subject. A wing expression indicates the path as a series of limb expressions separated by the . character. E.g.,

You can read this as inner-limb in outer-limb in limb, etc. Notice that these read left-to-right!

A wing is a resolution path pointing to a limb. It's a search path, like an index to a particular labeled part of the subject.

Here are some examples:

To locate a value in a named tuple data structure:

A wing is a limb resolution path into the subject. This definition includes as a trivial case a path of just one limb. Thus, all limbs are wings, and all limb expressions are wing expressions.

We mention this because it is convenient to refer to all limbs and non-trivial wings as simply “wings”.

Hoon doesn't have variables like other programming languages do; it has faces. Faces are like variables in certain respects, but not in others. Faces play various roles in Hoon, but most frequently faces are used simply as labels for legs.

A face is a limb expression that consists of a series of alphanumeric characters. A face has a combination of lowercase letters, numbers, and the - character. Some example faces: b, c3, var, this-is-kebab-case123. Faces must begin with a letter.

There are various ways to affix a face to a limb of the subject, but for now we'll use the simplest method: face=value. An expression of this form is equivalent in value to simply value. Hoon registers the given face as metadata about where the value is stored in the subject, so that when that face is invoked later its data is produced.

If you use a face that isn't in the subject you'll get a find.[face] crash:

You can even give faces to faces:

There is no restriction against using the same face name for multiple limbs of the subject. This is one way in which faces aren't like ordinary variables:

There are matches at steps 4, 6, and 7 of the total search path, but the search ends when the first match is found at step 4.

In any programming paradigm, good names are valuable and collisions (repetitions, e.g. a list named list) are likely. There is no restriction against using the same face name for multiple limbs of the subject. This is one way in which faces aren't like ordinary variables. If multiple values match a particular face, we need a way to distinguish them. In other words, there are cases when you don't want the limb of the first matching face. You can ‘skip’ the first match by prepending ^ to the face. Upon discovery of the first match at address n, the search skips n (as well as its children) and continues the search elsewhere:

Recall that the search path for this noun is:

The second match in the search path is step 6, b=6, so the value at that leg is produced. You can stack ^ characters to skip more than one matching face:

When a face is skipped at some address n, neither the head nor the tail of n is searched:

We say that the inner face has been shadowed when an outer name obscures it.

If you run into ^$, don't go look for a ^$ ketbuc rune: it's matching the outer $ buc arm. ^$ is one way of setting up a %= centis loop/recursion of multiple cores with a |- barhep trap nested inside of a |= bartis gate, for instance.

There are two symbols we use to search for a face or limb:

Logically, a:b is two operations, while a.b is one operation. The compiler is smart about : col wing resolutions and reduces it to a regular lookup, though.

Now we're equipped to go back and examine the syntax of the %= centis rune we have been using for recursion: it resolves a wing with changes, which in this particular case means that it takes the $ (default) arm of the trap core, applies certain changes, and re-evaluates the expression.

The $() syntax is the commonly-used irregular form of the %= centis rune.

Now, we noted that $ buc is the default arm for the trap. It turns out that $ is also the default arm for some other structures, like the gate! That means we can cut out the trap, in the factorial example, and write something more compact like this:

It's far more common to just use a trap, but you will see $ buc used to manipulate a core in many in-depth code instances.

|= bartis produces a gate. It actually expands to

where =| tisbar means to add its sample to the current subject with the given face.

Similarly, |- barhep produces a core with one arm $. How could you write that in terms of |% and ++?

Save this as a file /gen/num2digit.hoon, |commit %base, and run it:

A more idiomatic solution would use the ^ ket infix to compose a cell and build the list from the head first. (This saves a call to ++weld.)

A further tweak maps to @t ASCII characters instead of the digits.

(Notice that we apply @t as a mold gate rather than using the tic notation. This is because ^ ket is a rare case where the order of evaluation of operators would cause the intuitive writing to fail.)

Enter the following into dojo:

Once you have your data in the form of a list, there are a lot of tools available to manipulate and analyze the data:

Once you have a list (including a tape), there are a lot of manipulation tools you can use to extract data from it or modify it:

There are a few more that you should pick up eventually, but these are enough to get you started.

Using what we know to date, most operations that we would do on a collection of data require a trap.